I’m not much of a church goer. If I claim any religious background, it’s the Society of Friends (also known as Quakers) and am proud to be part of a long line of Richie Quakers dedicated to pacifism and civil rights. Over time, I’ve turned to finding religion in nature. The wilder the place the better. Yet, I’m open to spirituality shared by others, and especially a sermon given by horse trainer and preacher Joe at the Cowboy Church in the Driggs rodeo grounds last Sunday.

The occasion? I’d driven north from my remote campsite high in the Uinta Mountains of Utah to rendezvous with Steve Loken in Driggs, Idaho, on the west side of the Tetons. There, we met up with Steve’s brother Terry, who is  a horse trainer,  rodeo champion and longtime cowboy. Terry and Joe had come over from American Falls, where they work on a ranch with some 150 horses in various stages of training. Joining them was 17-year-old Adam,  a steady hand with surprising maturity.

Steve and I found Terry and Adam by the horse trailer brushing out the tail of Slick, the star of the upcoming sermon. He stood still, head up, ears alert and his coat gleaming brown. Not knowing much about horses, I could tell already this was quarterback was no ordinary stud.

A half hour later I learned why. Joe swung a leg over the saddle and walked into the rodeo grounds to speak to some 50 of us waiting in the bleachers. The sun shone bright in our eyes. On the horizon, clouds and Tetons vied for the position of grandest citadels of  the natural world.

Joe, who is youthful, tall and lanky with a wide grin, preached that day about “not settling” for less than we can be. As he rode Slick in circles, he spoke about God’s purpose and told a parallel story of Slick. He talked as Slick stepped it up from walk to a canter that could have rocked a baby to sleep.

“We used to call Slick ‘Leftovers’ because he was just passed by again and again,” Joe told us. Not until Slick was two years old did Joe take a closer look. He soon realized he’d encountered a special animal. Over time, he and Slick developed the relationship we witnessed that morning. By the end of the sermon, Joe had removed the reins and halter. Without making any motion that we could see, he urged Slick into an intricate dance that spun horse and rider in ever quickening circles.

This is a horse that  had clearly reached his highest potential. Not so, according to Joe. Their dance continues. Where once Joe was clearly the teacher, now Slick and Joe appear as one inseparable being. Like this church with a sky for a ceiling, their future together just might soar as high as the red-tail gliding over us.

Afterwards, I kept pondering this kinship of Joe and Slick.  A few days later while running with Steve’s border collie Patches, it came to me. Perhaps it’s our relationship with animals that brings out a “best” that just keeps getting better.  We all have the potential to be wiser, kinder, funnier and fulfilling ourselves and the world by our presence. While we can develop that with people for sure, there’s something about caring for animals that bridges all differences. People can disagree on so many things, but they can find great commonality in animals. From this place of familiarity and yes, love, we can act just a bit better toward each other and our planet. At least, I’d like to think so. Worth exploring on the journey.

When I watched Jo 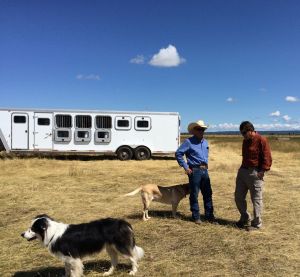 e and Terry chatting, I saw their likeness both in similar physique, and in their like-minded relationship with their dogs. Trooper the yellow lab and Patches the border collie wagged their tails at each other in salute and solidarity. They’re darn lucky and they know it. Terry and Steve have this gentle, fun-loving, affectionate delight in their dogs. It’s not over the top, but neither brother wants to be far from his dog ever.

As you know, I have a passion for birds. My favorite? Clearly it’s the belted kingfisher that plunges headfirst into clear streams and awakens every fiber in my body with their reverberating, rattling cry. The Halcyon bird. Wild birds have a way of uniting people, too, as the poet Yevgeny Yevtushenko wrote: “Why is it that in folk songs of all nations and all ages people express the desire to become birds? Because birds know no borders.”

But you can’t snuggle with a bird, pet one on the head or ride like the wind. Before sharing Patches as much as I can with Steve, I had a 16 1/2 year relationship with my dog Luna who did her part to raise my son Ian. She taught him to throw a tennis ball higher, farther and often.  She always came back to drop it at his feet. I know he’s taking those lessons with him to college, along with all the lovin’ that goes with growing up with a dog like Luna.

Here’s to all the animals in our lives that bring us joy and remind us that not settling for less means recognizing that our power to love has no limits.

2 thoughts on “Sermon from the Mount: Exploring our Kinship with Animals”