“O magic sleep! O comfortable bird . That broodest o’er the troubled sea of the mind Till it is hushed and smooth.”  – Poet John Keats (from Endymion)

Last week  in British Columbia, Canada,  while driving  in my green truck/camper bearing its “Alcyon” Montana Audubon license plate, my friend  and I spotted an enticing location on the map, north of our planned mountainous route up Kootenay Lake west over a pass to Slocan Lake and south through Nelson.

There it was, “Halcyon Hot Springs,” boldly spelled out on the regional map on the shores of Upper Arrow Lake. We had no choice, but to check it out. We asked one resident in the quaint, sleepy and stunningly located town of Kaslo on Kootenay Lake. “Hmmm. It might be a bit posh, but I’ve never been there,” she told us.

Oh my. We don’t do posh. What if we got there and it would be glitzy, garish and a slap in the face of all that Halcyon means to me as I pursue my “Halcyon quest” that is the kingfisher journey of this Blog?

Halcyon is the definition of kingfisher.  My license plate bears the Greek form of the word and is part of the latin name for the belted kingfisher: Megaceryle alcyon.  The word Halcyon has also come to mean happiness and tranquility as in “Halcyon Days.” 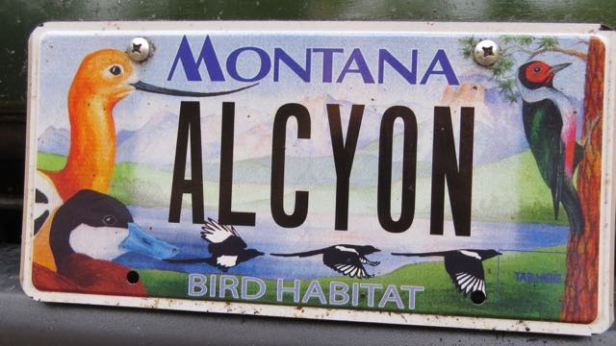 The origin is the myth I’ve fallen for. Once a queen in ancient Greece, Halcyon was the` daughter of Aeolus, king of the winds. She fell in love with Ceyx, king of Trachis of Thessaly and son of Eosphorus, the morning star. Their love was all that defines happiness, until the fateful day that Ceyx took a sea journey to consult the oracle of Apollo.

Halcyon feared for him, because she knew all too well the fierce nature of the storms that her father Aeolus blew across the Aegean Sea. She was right. Thunder roared. Lightning cracked. The waves rose and the ship sank. Ceyx only  had words of love for his Halcyon on his dying lips.

Yet, the gods watched and heeded the prayers of Halcyon who yearned for  his return. Ceyx did come back, yet drowned as he washed up on the waves toward the beach where she waited. Halcyon saw him and in her grief, threw herself from a quay into the sea to die with him. As the lovers touched cold lips, the gods relented.

They transformed them into kingfishers who would nest upon the sea for seven days on either side of every winter solstice. Then, Aeolus would calm the seas for them. Those lulling days in the winter ocean the sailors would come to call the “Halcyon Days.”

As we made our way north to Halcyon Hot Springs on a misty morning after camping by a remote small lake among the cedars and high peaks on either side of us, the anticipation grew. When we at last saw the entry sign, we were stunned. There it was. Halcyon Hot Springs with a kingfisher flying right above the word HALCYON, and a wing even dipping between the L and the C. Below the main blue sign was a smaller brown sign for the Kingfisher Restaurant, with another kingfisher in flight. 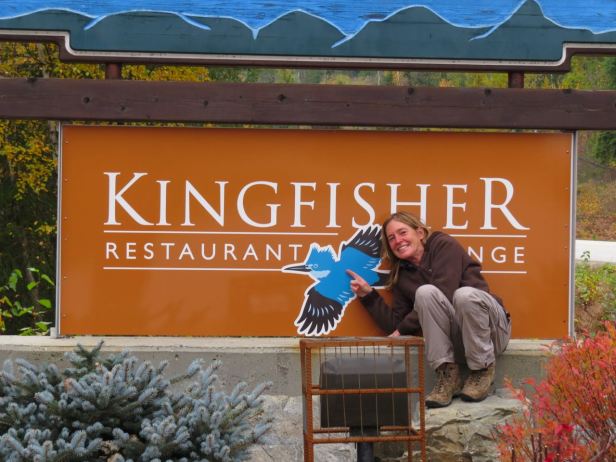 Yet still we worried about this word, “posh.” On the map, we’d also seen reference to undeveloped hot springs discoverable up dirt roads off the lake, more our style. However this wooden entry sign, while large felt welcoming and not garish. The kingfisher greeted us. Never have I seen a sign of any kind that links Halcyon with Kingfisher. In fact, I was a little worried that this book I’ve taken so long to write might come out late, after the surprise was out. Even writing this Blog, I have to tell any of you to keep the myth and connection a secret. Thank you!

We wended down the road lined with golden-leaved cottonwoods and shadowy cedars. Rounding the corner to see the entry of the wood lodge with its craftsmen appearance that at once appealed to Steve (the tasteful builder), we thought. No. Not posh. Charming! And there it was again—another Halcyon Hot Springs sign with the kingfisher. 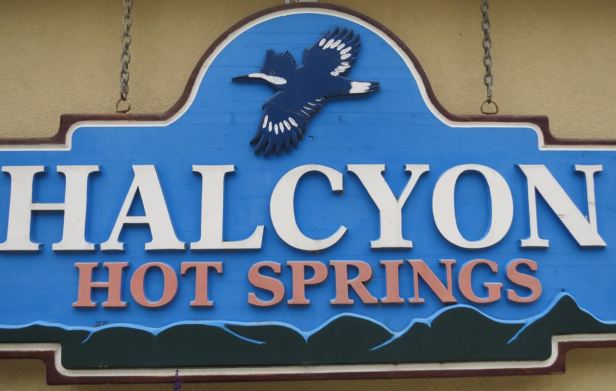 Twenty minutes later we were soaking in the curved pools above a wild lake in mist that obscured the peaks across the lake. Peaceful. Blissful. Hushed voices of others in the pool felt dreamy, suspended in mists. We chatted about the knowledge we had just gained from reading a couple handouts before dipping in.

This hot spring’s name “Halcyon”  was derived from the mineral content of the springs that is six times higher in lithium salts than any other hot springs in North America. Lithia water is known for treating depression. And here we were sipping the cold lithia waters and feeling the hot lithia waters soothing our skins, entering our pores. We felt repose.

But one puzzle remained. Nowhere in the literature we read did we see any reference to kingfishers. The bird appeared everywhere on resort signs, yet for most if not all people who visited, the bird in flight  is simply a lovely bird, perhaps in its crested head, its flashing wings  and the nature of flying itself connoting Halcyon as a lifting of the spirits. 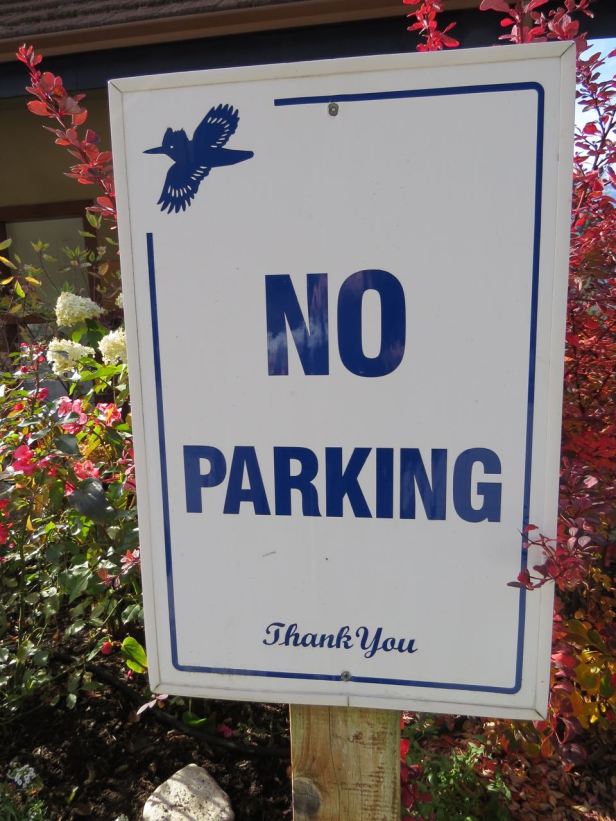 There in the hot springs, I shared the myth of Halcyon and Ceyx with a couple from Edmonton who had come for the healing nature of the waters. They loved it. They wanted me to write the story for the lodge and perhaps I will. But right then?

Ah. Too much hot water and bliss. All I wanted to do was to feel the unwinding, softening and soothing waters. Don’t we all need that in our lives? Let go of ambitions, of “to do” lists and saving the world just for awhile. Then after rest we can fly up from the Halcyon hot springs on strong and sure wings of kingfishers rejuvenated and hopeful.

Later, after a gourmet lunch in the lodge (another secret is the award-winning chef), we wandered the grounds as the sun shone to reveal a dramatic jutting mountain directly across from us. There, we found the Anna Burnham Chapel, the heart of Halcyon Hot Springs. 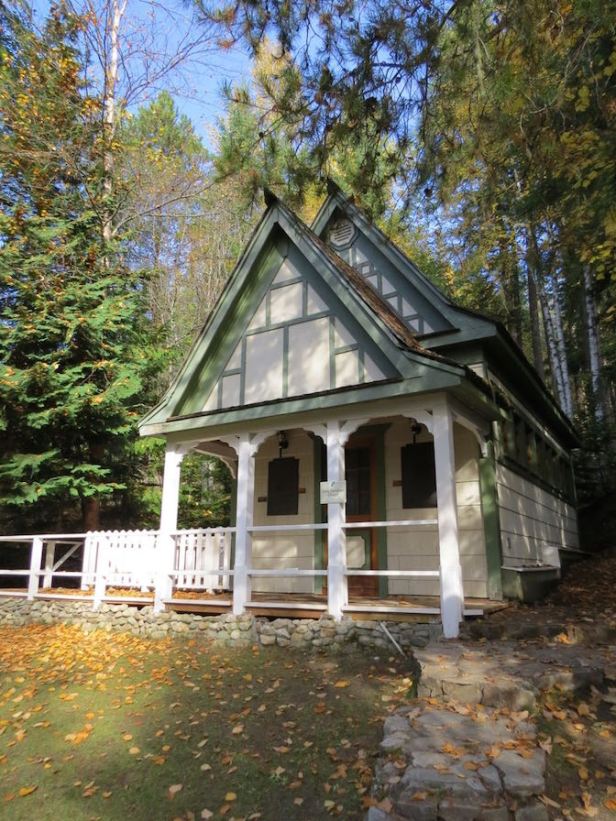 Small and tucked into the forest, the chapel was built by Anna’s husband Frederick Burnham who died tragically in a 1955 fire that burned the original hotel to the ground. Frederick, a medical doctor, bought the resort in 1924 and for years promoted the healing of the lithia-rich waters for people who ailed from any cause. He forbade people to wear clothes in the waters that he believed would impede the healing. He ran barefoot on forest trails for health.  He also loved his wife, perhaps like Ceyx loved Halcyon.

Clearly, they had imbibed of the waters for many years. I drank in the quote on the plaque outside the door and felt tears mixing with a smile as I read: 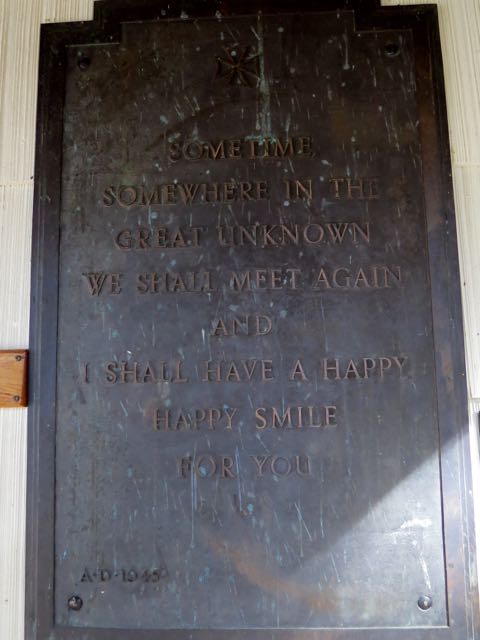 “Somewhere in the great unknown, we shall meet again and I shall have a happy happy smile for you.”

Oh yes. For all who have deeply loved another person, this quote brings comfort that when our life ends we shall meet again and  with a “happy happy smile for you.”

I opened the door to the chapel and the scent of cedar wafted toward me in yet another Halcyon moment—of the great forests that once graced much of British Columbia.  I inhaled deeply of trees and touched the pews of cedar as I looked up through windows graced with etched glass kingfishers within diamond shapes of cedar. I’m not religious, but I am spiritual and here I could have stayed and meditated for a long time, and so I shall next time. For there will be a next time. 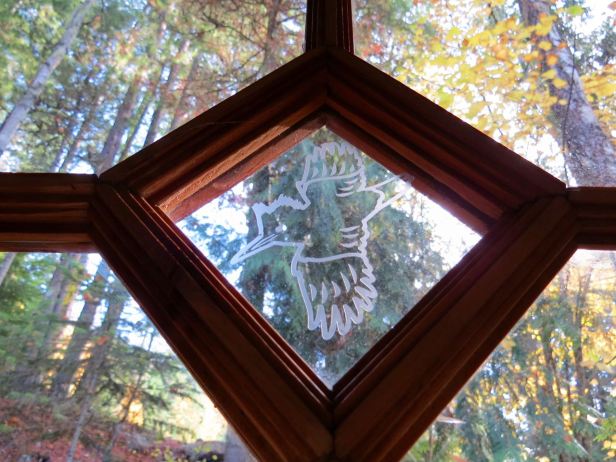 And for you my Blog readers? Shhhhhhhh. This is a secret place. You can come, but don’t tell anyone else. Remember, it’s a very long way to Halcyon Hot Springs. While not “posh” in the sense of over the top, it is far from the undeveloped hot springs that are nearby. It’s a bit pricey to stay there, and  not a place you drive by on your way to another destination.

For me?  If it’s a long time before my return, I am fortunate to find the gift of Halcyon in every kingfisher rattle call, every flight, every stream and river and bay that harbors the bird of happiness. 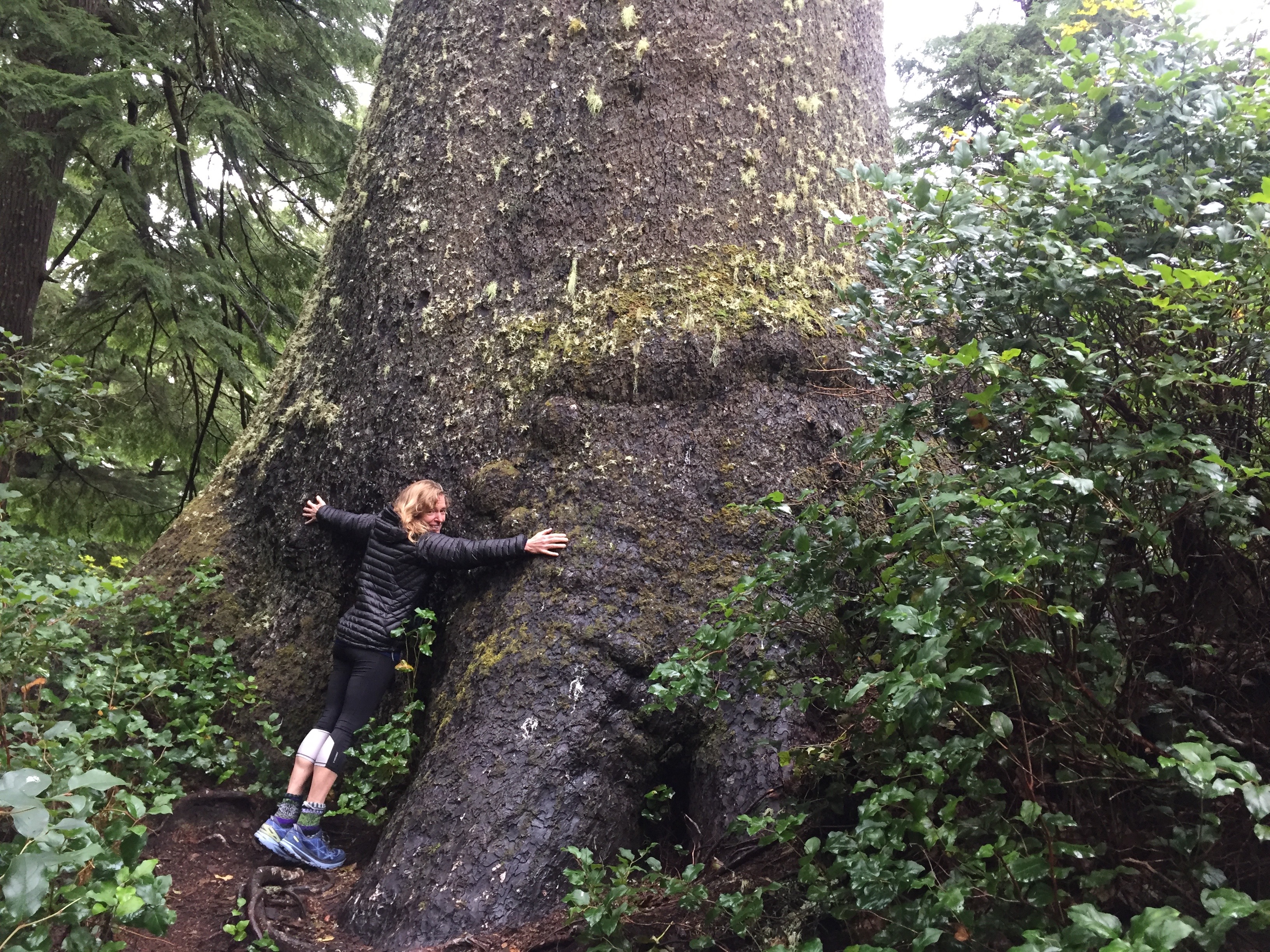